Ever since I was little eclairs have been my favorite. They were something we would get as a treat or for special occasions. I’ve always preferred whipped filling over custard so I decided to take an eclair recipe we saw on The Great British Bake-off up a notch with a little spiced whipped cream.

Don’t worry, making eclairs isn’t as daunting as it may sound. It consists of just 3 elements: a simple choux pastry base, whipped filling, and chocolate ganache glaze. In under an hour you’ll have 4-8 delicious spiced whipped cream filled eclairs!

The trick to a successful eclair is in the choux. Choux pastry, or pâte à choux, is a light pastry dough used in many well known deserts like eclairs, cream puffs, and the theme park favorite churros. It’s essential your choux pastry is the right consistency before pipping and baking. The perfect choux is thinner than a dough and thicker than a batter. It will stick to a spoon when scooped, but falls off into thick ribbons if lightly tapped.

For the chocolate glaze I prefer a classic ganache with semi-sweet chocolate. The original recipe I used called for melted milk chocolate. I found the consistency of melted chocolate too dry (hence the look). I added some cream in the end to thin the chocolate but still did not achieve a pouring or dipping consistency. Ganache will give you that classic shiny glaze look.

What really made these eclairs for me was the spiced whipped cream. I find regular homemade whipped cream to be rathe bland or overly sweet. The cinnamon added a nice hint of spice to the flavor profile. 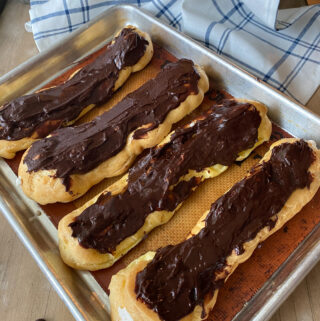