I’m kicking myself now for fighting the Pintrest revolution for so long.  I think I fought it because I was already doing so many different “social media” things that I didn’t want to learn another one or get sucked in.  Well I’m happy to admit that I have been sucked in, but this time it’s very meaningful.
Before Pintrest it was Stumble Upon, which still applies at times, but often the crafts and recipes become lost.  Buried in the sea of other “thumbs up” sites.  Pintrest works like our brains does and helps us to categorize.  I’m very visual too so the huge pictures staring at me in the face saying eat me, make me; have become a real motivator.  Anyone else in the same boat?
Let’s say it’s my one week anniversary and I’ve managed to do a total of 3 of my pins.  I’m so excited about this one, in a complete duh! kind of moment.
That’s right ladies and gentlemen crispy delicious hash browns in a waffle iron.  You know that heavy waffle shaped griddle you bring out maybe once a year to make a “special” chocolate chip waffle breakfast for your kids, that one.  Pull it out because this baby has so many more uses.  It is no longer the evil step cousin of the George Foreman.  This baby can do breakfast, sides, deserts.  I’m still thinking of ways to make the list longer.  Now on to the real fun.
Preheat your waffle iron to a medium to medium-high setting.
My first batch I did medium and it took longer to cook and came out drier, crispier.  The second batch I did the latter and it still came out crispy, but not quite as dry. 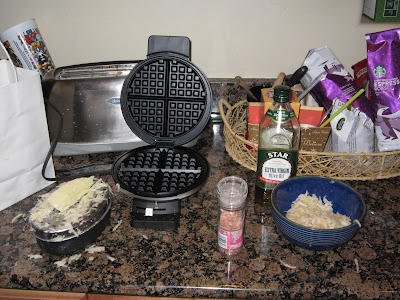 Supplies:
Russet Potato (1 potato filled my ~10″ iron)
Box Grater
Seasonings (we did salt and pepper)
Oil (we used olive oil, but the recipe I saw called for vegetable)
1. Peel your potato
2. Grate your potato with medium box grater
3. Squeeze and drain the liquid from potato shavings
4. Mix in your seasonings
5. Oil your surface with a basting brush or cooking spray
6. Grab a handful of shavings squeezing out any extra liquid
7. Cover waffle iron with potatoes spreading evenly
8. Close lid and let it do some magic for the next 10 min or so.
9.  Check it after 5-6 minutes, pull it off once it’s reached your preferred doneness. 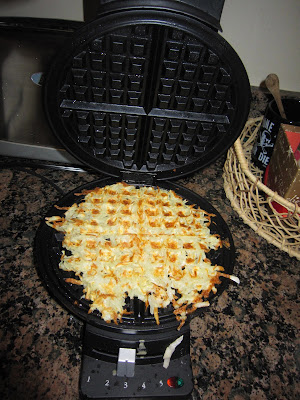 after 5 minutes
Final product, promptly slathered in ketchup and devoured! 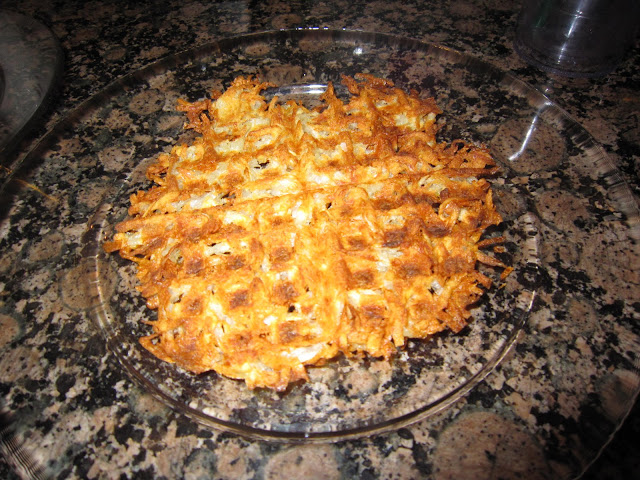