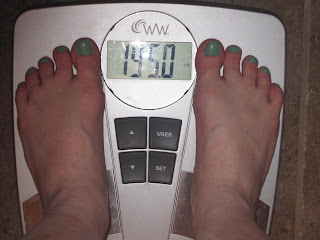 I was pleasantly surprised when I hopped on the scale this week.  In fact I was in such shock I had to weigh myself about 10 times and in several spots throughout the bathroom just to make sure it was accurate.  I lost a total of 2.8 pounds since my last weigh in 2 weeks ago.  That brings my total weight loss since jumping on the Mamavation bandwagon to a whopping 6.2 pounds!  That’s right, I can now proudly display my 5 pound badge, and less than 4 pounds to go for the next one.  Who knew a little green box would make me so happy.  It only took 5 weeks, but that’s a steady pound+  weekly average and I couldn’t be happier.

Next on tap for the Denton household: Juice Cleanse.  Huh?!  But Kelly you don’t like fruits or vegetables, the only juice you drink is Orange.  Precisely!  After watching Fat, Sick & Nearly Dead

this past weekend my DH and I were inspired.  This documentary was amazing.  Several years ago after suffering from severe exhaustion and a myriad of stomach problems I did a gluten and dairy fast.  For over a month I cut out everything I loved.  No cheese, bread, milk, I went completely cold turkey.  To my surprise at the end of that time I felt refreshed.  I began adding dairy and gluten back in to my diet and I rarely feel sick after eating a slice of pizza or a bowl of ice cream (with the exception of those occasional pizza and ice cream binges).
This movie (at the recommendation of my seasoned juicing brother) and the concept of a Juice fast come on the heals of a decision to incorporate more veggies and fruits into my diet.  The problem is my limited taste for all things fruit and veggie.  We started doing Bountiful Baskets and I have tried a few, but my taste buds are just not accustomed to such a wide variety.  That’s where the Breville Juicer comes in to help.  Our plan was  to start the transition this week.  Try out some recipes get it down good before fully committing.  Only problem is, seems like everyone else had the same idea and all Breville Juice Fountains are completely out of stock in town and on most major online retailers.  Fingers crossed my MIL will score one in Phoenix and we’ll be juicing by Saturday.

My initial commitment is a week, but I’d like to go longer if possible.  Hopefully by next Monday I will be started on my Juicing journey and quickly headed towards widening my palette and feeling refreshed.  I’m also excited to trying out some deception on my son and sneak some juices into his favorite foods.  This kid LOVES fruits, but is very limited in his veggie choices.
Tweet
Pin
Share
0 Shares
Previous Post: « {Mamavation} Monday: Week 5
Next Post: The Day He Was Born {sponsored} »